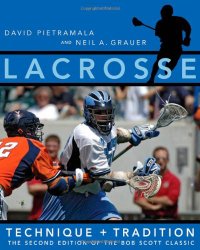 For thirty years Bob Scott's Lacrosse has been the ultimate guide to the "fastest game on two feet," explaining the men's game at its highest level and promoting the Johns Hopkins philosophy, which has become synonymous with lacrosse excellence. In this long-awaited updated edition, Coach Dave Pietramala, whose Blue Jays won the 2007 and 2005 NCAA men's lacrosse championships, and Neil Grauer, a Hopkins graduate and veteran writer on lacrosse, among other subjects, have reworked every chapter, modernizing sections on rules, equipment, preparation, and tactics. They revisit topics such as drills and skills for specific positions, game strategy, clearing tactics, and the history of the game itself―including a section on the Johns Hopkins contributions to lacrosse. New diagrams and images help to clarify concepts and instructions in the text. Action and instructional photos by Hopkins photographer James Van Rensselaer capture some of the drama from the 2005 championship year and accompany the teaching chapters.Like the Bob Scott book on which it builds, this edition will soon become familiar to every serious student of the sport.

The Te of Piglet
Understanding Comics: The Invisible Art
1453: The Holy War for Constantinople and the Clash of Islam and the West
Krakatoa: The Day the World Exploded: August 27, 1883
A Menstrual Journey: Through the Old & the Dark to the New, the Light, & the Possibilit...
No Yelling!: A Baby Blues Collection