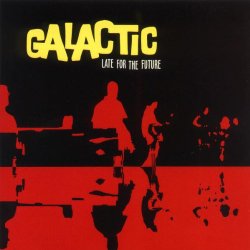 Galactic has always known how to serve up the old-school Crescent City funk in all of its rump-shaking glory, and every stop on their endless string of marathon shows only tightens them up another notch. Late for the Future, their third record, builds on their solid funk foundation and stands as their most ambitious, assertive, and sonically interesting work to date. For one, Galactic bare their teeth like never before, adding a furious intensity and pure rock raunchiness that they haven't previously captured on record. Listen to the thick and meaty sounds they conjure on "Century City" and "Action Speak Louder Than Words." The band also explores new territory with tracks like "Hit the Wall," with its distinct Middle Eastern flair, and "Two Clowns," which takes the music further out than its ever been. Much of the credit must go to producer Nick Sansano, who has beefed up their sound and inspired a more multifaceted approach. Old-school funk remains Galactic's bread and butter, but it's no longer the whole meal. --Marc Greilsamer

Do you want ot get the Late for the Future?