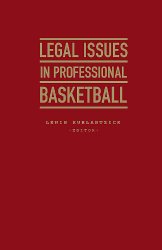 The volume will be the second in an ongoing project on the legal regulation of athletics. It will consist of a set of essays on a variety of legal issues facing professional basketball. The contributors are a distinguished group of academics and practitioners who have long focused their intellectual efforts on the legal governance of professional and amateur athletics. And this is a much needed addition to the law literature both in the United States as well as internationally. Basketball now rivals soccer in worldwide popularity. Accordingly, one chapter will attend to the international dimension of the sport. A principal focus will be the present restrictions on the free flow of labor and capital. Thus, leagues abroad commonly place a limit on the number of foreign players (i.e., Americans) who can be on a team roster. Comparable limitations are placed on foreign ownership of teams. In addition, the National Basketball Association (NBA) has an agreement with FIBA , the international governing body for basketball, that regulates movement of players across continents. The legality of these arrangements will be evaluated. While attention will be paid to the law of the European Union, the principal assessment will be under United States antitrust law. That assessment also raises the important issue of the reach of American law with respect to international transactions. The globalization of the sport has been aided by the development of the internet, which has affected the manner in which games and information about games are disseminated. Not surprisingly, issues about the control of cybermarket opportunities as between leagues and teams have come to the fore. The law both facilitates and limits these developments, in light of the public interest in access to information. A full chapter will explore these internet-related issues. Employer-employee relations,and in particular disciplinary arrangements, have a distinctive cast in the NBA as compared with more conventional industries. That uniqueness flows from the lack of the typical market constraint on management discipline. Imagine an insurance industry executive. For him, market forces tend to limit the potential for abusive treatment by his employer and provide him with other employment options if he is maltreated. This market constraint does not operate in professional basketball because a Commissioner suspension amounts to a ban on hiring by all employers in the industry. A chapter will present a critique of the disciplinary arrangements that have evolved in the NBA. The location and relocation of franchises are matters of central importance for teams, league, and municipalities. The league's ability to artificially limit the number of franchises below the market-clearing number provides teams with major leverage over communities anxious to keep or acquire a professional franchise. The manner in which a municipality might constrain exercise of this market power is a matter of enduring social importance. One chapter will analyze leasing arrangements as one response. Another chapter will explore the dynamics of team-municipality negotiations. Both will use the move of the Seattle Supersonics to Oklahoma City as a starting point. Among the four major sports in the United States basketball alone supports a professional women's league. A chapter will examine the history, organizational structure, and distinctive problems of the WNBA. This chapter may provide a vehicle for exploration of societally related gender and discrimination issues as well.

Do you want ot get the Legal Issues in American Basketball?

Soccer in Sun and Shadow
The House at Riverton: A Novel
Factory Man: How One Furniture Maker Battled Offshoring, Stayed Local – and Helped Save an ...
Basic Machines and How They Work
Rich Dad’s CASHFLOW Quadrant: Rich Dad’s Guide to Financial Freedom
Lab Girl