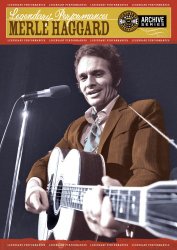 From the vaults of the Country Music Hall Of Fame and Museum, this collection features nearly two decades of Merle Haggard performances in his prime not seen since their original broadcast. Now, for the first time on DVD, experience the hits through a chronology of vintage live performances such as "Branded Man" (Country Music Holiday,1968), "Mama Tried" (Billy Walker's Country Carnival, 1968) and "Okie From Muskogee" (The Porter Wagoner Show, 1970). When Merle Haggard left prison in 1960, he went on to achieve 38 #1 hits (to date) and establish himself as one of the greats in country music. But getting out of prison didn't quite mean leaving his rebel ways behind. His songwriting depicted the truths of a rough-and-tumble life which he fused with a musical style derived from hardcore country, jazz, blues and folk to create a sound no one had ever heard, with lyrics many could relate to. From the walls of San Quentin to his free-spirited life as an irreverent and unique voice outside the Nashville establishment to his induction in the Country Music Hall of Fame, Merle Haggard has never left a doubt that he is country's original outlaw. Program listing: Branded Man Country Music Holiday (1968) The Bottle Let Me Down Country Music Holiday (1968) Swinging Doors Country Music Holiday (1968) Mama Tried Billy Walker's Country Carnival (1968) I Started Loving You Again Billy Walker's Country Carnival (1968) I Take A Lot Of Pride In What I Am Billy Walker's Country Carnival (1968) The Fightin' Side Of Me The Porter Wagoner Show (1970) Okie From Muskogee The Porter Wagoner Show (1970) Daddy Frank (The Guitar Man) CMA Awards (1972) Workin' Man Blues Pop! Goes The Country (1974) Movin' On Pop! Goes The Country (1975) The Roots Of My Raising The Porter Wagoner Show (1977) Ramblin' Fever Pop! Goes The Country (1977) That's The Way Love Goes CMA Awards (1983) San Antonio Rose Johnny Cash Christmas Special (1983) Extras: Merle Haggard Interview (1981) Merle Haggard's Hall Of Fame Induction (1994)

Do you want ot get the Legendary Performances: Merle Haggard?