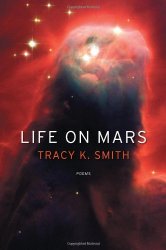 Winner of the 2012 Pulitzer Prize* A New York Times Notable Book of 2011 and New York Times Book Review Editors' Choice ** A New Yorker, Library Journal and Publishers Weekly Best Book of the Year *New poetry by the award-winning poet Tracy K. Smith, whose "lyric brilliance and political impulses never falter" (Publishers Weekly, starred review)You lie there kicking like a baby, waiting for God himself To lift you past the rungs of your crib. What Would your life say if it could talk? ―from "No Fly Zone"With allusions to David Bowie and interplanetary travel, Life on Mars imagines a soundtrack for the universe to accompany the discoveries, failures, and oddities of human existence. In these brilliant new poems, Tracy K. Smith envisions a sci-fi future sucked clean of any real dangers, contemplates the dark matter that keeps people both close and distant, and revisits the kitschy concepts like "love" and "illness" now relegated to the Museum of Obsolescence. These poems reveal the realities of life lived here, on the ground, where a daughter is imprisoned in the basement by her own father, where celebrities and pop stars walk among us, and where the poet herself loses her father, one of the engineers who worked on the Hubble Space Telescope. With this remarkable third collection, Smith establishes herself among the best poets of her generation.

Through a Season of Grief: Devotions for Your Journey from Mourning to Joy
Edge of Eternity: Book Three of The Century Trilogy
Gardner’s Art Through the Ages: A Global History
An Old-Fashioned Christmas: Sweet Traditions for Hearth and Home
Painter’s Handbook: Revised and Expanded
Because of Miss Bridgerton