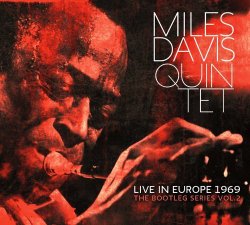 LIVE IN EUROPE 1969 lives up to the Miles Davis Bootleg Series mission of presenting live performances that are previously unreleased, have previously only been bootlegged, or are very rare. This new set is the first collection of Miles's Third Great Quintet, the "Lost" Band of 1968-1970 with Miles Davis, Wayne Shorter, Chick Corea, Dave Holland, and Jack DeJohnette at their peak (they were never recorded in the studio). The album captures the short-lived quintet in three separate concert settings, starting with two full-length (one hour-plus) sets at the Antibes Jazz Festival in France, in Stockholm as part of "The Newport Jazz Festival In Europe," and completed with a stunning 46-minute performance at the Berlin Philharmonie, filmed in color.DISC 4 (DVD Content)Recorded 11/7/69 at Berliner Jazztage in the Berlin Philharmonie1. Introduction by John O Brien-Docker2. Directions3. Bitches Brew4. It s About That Time5. I Fall In Love Too Easily6. Sanctuary7. The Theme