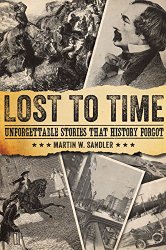 Stories that history forgot… but readers will remember. “The only thing new in the world,” said Harry S. Truman, “is the history you don't know.” In this fascinating collection of historical vignettes, Martin W. Sandler (author of Resolute and Atlantic Ocean) restores to memory important events, people, and developments that have been lost to time. Though barely known today, these are major historical stories, from Ziryab, an eighth-century black slave whose influence on music, cuisine, fashion, and manners still reverberates, to Cahokia, a twelfth-century city north of the Rio Grande, which at its zenith contained a population estimated to have been as high as 40,000 (more than any contemporaneous European city), to the most devastating fire in US history—not the Great Chicago Fire of October 8, 1871, but the Peshtigo Forest Fire in Wisconsin, which occurred on the same day.  These tales are far from trivia; they illuminate little-known American and foreign achievements, ingenuity, heroics, blunders, and tragedies that changed the course of history and still resonate today. Includes 76 black-and-white illustrations.

Do you want ot get the Lost to Time: Unforgettable Stories that History Forgot?