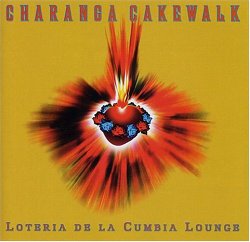 Charanga Cakewalk isn't really a band, but a project from multi-instrumentalist Michael Ramos, who's worked with artists like the BoDeans, the Rembrandts, John Mellencamp, and Patty Griffin. This takes him in a very different direction, however, toward his family's roots of Latin music. There's very little traditional about it. Instead, Ramos keeps a downbeat electronica vibe running through his pan-Latin ideas, where cumbias merge with everything else, taking in an early Santana influence on "Mexicanos" (but without the lead guitar) or a touch of Manu Chao style on "Tu y Yo," with its slightly loopy rhythm and merrily sloppy vocals. In between there's plenty to enjoy, mostly originals apart from "La Negra Celina" (which is also appended in a light Hex Hector remix). A few guests add vocals and guitars, but this is about the grooves, the melodies, and the rhythms, and Ramos has plenty of all three. Modern enough in its sound to keep the attention, but still old-school enough to pay attention to melody, it's a fascinating, and thoroughly enjoyable, piece of work. It's also a remarkably accomplished debut that bodes very well for the future.