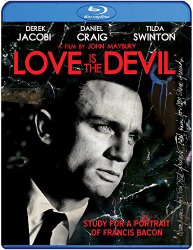 'John Maybury's searing portrait of the English painter Francis Bacon (Derek Jacobi) at the height of his fame in the 1960s is one of the nastiest and most truthful portraits of the artist-as-monster ever filmed. Its story of the colossally self-absorbed artist and his self-destructive younger lover, George Dyer (Daniel Craig), begins when Bacon awakens in his studio one night to discover a burglar on the premises. Sizing up the thief as an appetizing piece of rough trade, Bacon makes a proposition: if the robber sheds his clothes and comes to bed with him, he promises, he can have anything he wants...in presuming to take you inside the mind and heart of a major artist, confronting the demonic aspect of the human condition, LOVE IS THE DEVIL, goes as far and as deep as any movie has dared.' - Stephen Holden, The New York TimesBonus Features:Audio Commentary Track with Director John Maybury and Actor Derek JacobiOriginal Theatrical TrailerEnglish SDH