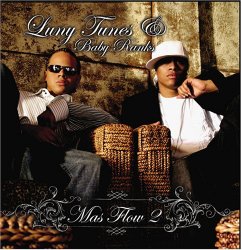 The young duo Francisco Saldana and Victor Cabrera once worked at Harvard University as a chef and a dishwasher, respectively--but that was before they began remixing, redefining, and revolutionizing the burgeoning reggaeton movement. Talk about a Cinderella story: Known collectively as Luny Tunes, the pair has assembled a first-rate posse of stars for Mas Flow 2, the follow-up to 2003's first installment. Luny Tunes have been called reggaeton's answer to hip-pop producers the Neptunes, and Mas Flow 2 goes a long way towards justifying the comparison. High-wattage stars Daddy Yankee, Ivy Queen, Vico-C and Tego Calderon make appearances throughout the two-disc collection, and lesser-known artists are also highlighted. Even Frankie J pops up for a charged-up remix of his pop hit, "Obsession." The jerky beats of reggaeton can get a bit repetitive, but Luny Tunes add enough flavor to keep the hips swaying throughout the disc's 20-plus tracks. --Joey Guerra

Do you want ot get the Luny Tunes & Baby Ranks: Mas Flow 2?