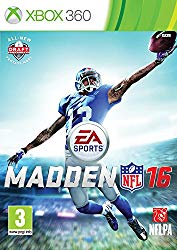 Be The Playmaker in Madden NFL 16 from the draft room to the gridiron. Experience Draft Champions, a new, fast-paced, and repeatable way to play where you'll draft your fantasy team of NFL superstars and legends, then take them to the field for the absolute test. New QB controls including body-relative throws, plus touch and roll out passes provide you with unprecedented depth and control while under center. Combined with a new risk/reward catch and pass-defend system, get ready for the biggest WOW moments in franchise history.