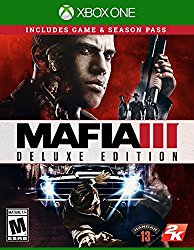 "The Mafia III Deluxe Edition includes the full game and Season Pass at a discounted price. The Season Pass grants access to three major expansions over the course of a year, each introducing unique new criminal story lines, characters and gameplay features to the world of New Bordeaux. Plus, get access to exclusive expansion-themed vehicles, weapons and more within each release.  Collectible map of New Bordeaux Included.1968. New Bordeaux. After years of combat in Vietnam, Lincoln Clay knows this truth: family isn’t who you’re born with, it’s who you die for. When his surrogate family, the black mob, is betrayed and wiped out by the Italian Mafia, Lincoln builds a new family on the ashes of the old and blazes a path of military-grade revenge and redemption through the Mafioso responsible."