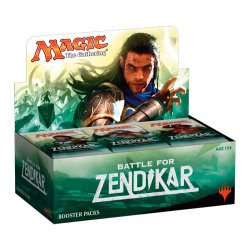 WOCB2713D Magic The Gathering Battle For Zendikar Booster Display Wizards Battle For Zendikar is the first of two sets in its block. It will be released october 2015. Battle For Zendikar is a large set and the first Magic block to only have 2 sets. Battle for Zendikar returns the storyline to Zendikar which previously has been featured in the Zendikar block. It is a plane of adventure, many treasures, and potent mana supplies. The plane is littered with large, floating polyhedron-shaped stones called Hedrons, that were created by Nahiri, the Kor Lithomancer. Together with Ugin and Sorin Markov she used them to trap the horrendous Eldrazi on the plane. Thousands of years later, the meeting of Sarkhan Vol, Chandra Nalaar and Jace Beleren in the Eye of Ugin chamber invol loosened the bonds that kept the Eldrazi in torpor. The Eldrazi were finally released by the elf Nissa Revane, thinking that they would leave Zendikar far behind them. She was wrong.