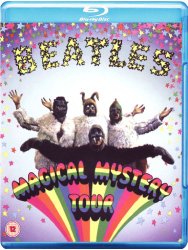 Content: Original Film restored Running time 53 minutes 8 page booklet Packaged in an amaray case+ SPECIAL FEATURESDirector's Commentary by Paul McCartneyThe Making of Magical Mystery Tour (19:05)- Features interviews with Paul and Ringo, along with other cast members and crew. Includes unseen footage. Ringo the actor (2:30) - Ringo reflecting on his role in the film. Meet The Supporting Cast (11:27)- A feature on the background and careers of Nat Jackley, Jessie Robins, Ivor Cutler, The Bonzo Dog Doo-Dah Band, Victor Spinetti, George Claydon, and Derek Royle. 'Your Mother Should Know' (2:35)'Blue Jay Way' (3:53)'The Fool On The Hill' (3:05) - Three new edits of these performances all featuring footage not seen in the original film.'Hello Goodbye' (3:24), as featured in Top of the Pops 1967- The Beatles allowed the BBC to film them in the edit suite where they were working on Magical Mystery Tour. This was then turned into a promo by the BBC, who shot their own additional footage. It was then broadcast on Top of the Pops to mark the 'Hello Goodbye' single going to No 1 in December 1967. Nat's Dream (2:50) - A scene directed by John featuring Nat Jackley. Not included in the original film. Ivor Cutler 'I'm Going In A Field' (2:35) - Ivor performs 'I'm Going In A Field', in a field. Not included in the original film. Traffic 'Here We Go Round The Mulberry Bush' (1:53) - The filming of Traffic acting out their 1967 hit single 'Here We Go Round The Mulberry Bush' was commissioned by The Beatles for possible inclusion in Magical Mystery Tour but was not used in the final edit.TECHNICAL SPECAspect ratio - 1.33:1Frame rate - 1080i 59.94 Audio Options:DTS-HD Master Audio 5.1Dolby Digital 5.1PCM stereo for Blu-Ray Subtitle language options for feature, extras and commentary: EnglishFrançaisDeutschEspañolItalianoPortuguêsNederlandeSvenskaNorskDanskSuomiHistoryIn September 1967 The Beatles embarked on making their third film, this time conceived and directed by themselves. Based on a loose unscripted narrative, in the spirit of the experimental mood of the time, and directed by The Beatles themselves, the film became the vehicle to present 6 new songs - Magical Mystery Tour, The Fool On The Hill, Flying, I Am The Walrus, Blue Jay Way and Your Mother Should Know. Now, 45 years on, the virtually forgotten film has been fully restored and is being presented properly for the first time.The restoration of Magical Mystery Tour has been overseen by Paul Rutan Jr. of Eque Inc., the same company that handled the much acclaimed restoration of Yellow Submarine. The soundtrack work was done at Abbey Road Studios by Giles Martin and Sam Okell. All of the packages contain a host of special features, packed with unseen footage. There are newly-filmed interviews with Paul McCartney, Ringo Starr, and other members of the film's cast and crew, as well as a director's audio commentary recorded by Paul.