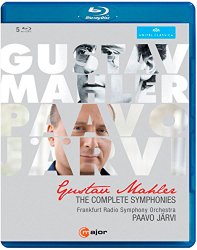 The HR-Sinfonieorchester, under the direction of Paavo Järvi, has for decades been numbered among the worlds leading Mahler orchestras. This incredible box set, recorded between 2008-2013, includes Mahler's ten symphonies and over an hour of intoductions by Paavo Järvi. The recordings were made in the unique space of the Basilica of Eberbach Monastery, in the magnificent ambiance of the Friedrich von Thiersch Hall at the Wiesbaden Kurhaus and in the outstanding acoustics of the Great Hall of the Alte Oper in Frankfurt. In 2006, Järvi became the principal conductor of the Frankfurt Radio Symphony Orchestra, and served in the post until 2014. Soloists include Swedish soprano Camilla Tilling, Austrian soprano Genia Kühmeier, British mezzo-soprano Alice Coote, Austrian tenor Nikolai Schukoff, and baritone Michael Nagy.