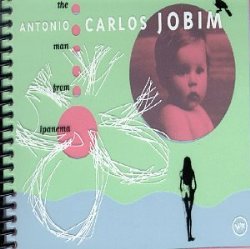 Antonio Carlos Jobim--the Brazilian composer, arranger, singer, and pianist and one of the creators of bossa nova--left an extraordinary legacy when he died of heart failure in 1994 in New York at age 67. Many of his songs--including "The Girl from Ipanema," "Chega de Saudade" ("No More Blues"), "Samba de Uma Nota So" ("One-Note Samba"), "Corcovado" ("Quiet Nights"), and "Insensatez" ("How Insensitive")--were not only hits in their day, but have become part of the American pop-music canon. Often easy on the ear, this is music of deceptive simplicity. In fact, a closer listening reveals sophisticated miniatures full of subtle power and grace, combining poetic lyrics, willfully naive melodies, and cool-jazz harmonies played to highly stylized, oblique variations of the samba beat. Packaged like a spiral notebook, this three-disc set, while neither complete nor definitive, offers useful, intriguing insights into the man and his music. The notes include a biography and interviews with Jobim, producer Creed Taylor, and arranger and producer Oscar Castro Neves. Musically, the 55-song collection is organized in three parts: a disc of vocal performances (revisiting classics such as Jobim's duet with Elis Regina in "Aguas de Marco"), a disc of instrumental versions, and a volume featuring several readings, by different groups, of some of Jobim's best-known works. Even after countless lounge cover versions, even after countless soul-deadening arrangements for background music in dentist offices, supermarkets, and elevators seemingly the world over, Jobim's work remains a pop rarity: a music of beauty, substance, and intelligence that rewards repeated listening. --Fernando Gonzalez

Do you want ot get the Man From Ipanema?