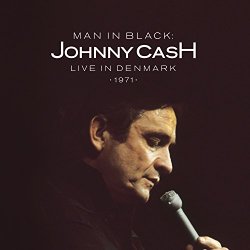 In 1971, Johnny Cash was sitting on top of the world, riding a wave of hit singles that had topped the country charts, winning a Grammy Award with wife and duet partner June Carter Cash for their rendition of "If I Was a Carpenter," and, since 1969, hosting a weekly music-variety program on network television whose guests included no less than Bob Dylan, James Taylor, Derek & The Dominos and many others. Cash was also an immensely popular concert draw, touring internationally at the helm of the stellar revue that was featured on his TV show and on Man in Black: Live in Demark 1971.Originally recorded for Danish television, this release spotlights Cash backed by his airtight backup band, The Tennessee Three, along with duets with June Carter Cash; appearances from Mother Maybelle Carter and her daughters Anita and Helen, Carl Perkins (of "Blue Suede Shoes" immortality) and The Statler Brothers, much loved for their off-the-wall humor and homespun four-part harmonies.Also included in this spirited set are early hits from the 1950s, including "I Walk the Line" and "Guess Things Happen That Way"; unforgettable tunes penned by Kris Kristofferson ("Sunday Mornin' Comin' Down," "Me and Bobby McGee"); the comical crossover pop hit "A Boy Named Sue"; and Cash's then-recent hit "Man in Black," which introduced Cash's infamous alter ego who stood up for underdogs everywhere. The stirring gospel finale of "Children, Go Where I Send Thee," featuring Cash and all his guest performers, is the perfect ending to a most ebullient performance by one and all.