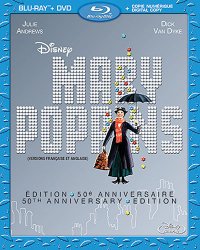 Released from the Disney Vault in celebration of its 50th Anniversary, this beloved classic shines on Blu-ray(TM) and DVD with an all-new restoration. Winner of five Academy Awards(R)(1964), including Best Actress (Julie Andrews), Best Song ("Chim Chim Cher-ee") and Best Special Visual Effects, MARY POPPINS is a movie experience your family will enjoy over and over again. "Practically Perfect In Every Way" Mary Poppins flies out of the windy London skies and into the home of two mischievous children. With the help of a carefree chimney sweep named Bert (Dick Van Dyke), the spirited nanny turns every chore into a game and every day into a "Jolly Holiday." Share the music, the magic, and the joy of MARY POPPINS with a whole new generation with Disney's special 50th anniversary edition!|The movie received 13 Academy Award(R) nominations and won 5 Oscars(R) for Best Actress, Best Song, Best Music Score, Best Film Editing, and Best Special Visual Effects. It also received a special scientific award for the creation and application of Color Traveling Matte Composite Cinematography, which helped make the combination of live action and animated actors in the film possible.|The special effects work on the film was the most challenging the studio had known. Everything from the two-strip sodium process and piano wire to bungee cords were used to create the magic sequences.|The film began its fabulous box office run at a lavish premiere at Grauman's Chinese Theater on August 27, 1964, becoming Disney's most successful feature at that time.|At the film's premiere, Pamela Travers, author of the "Mary Poppins" stories, approached Disney and commented, "Miss Andrews is satisfactory as Mary Poppins, but Mr. Van Dyke is all wrong, and I don't really like mixing the little cartoon figures with the live actors. When do we start cutting it?" Disney didn't change a thing.|Supercalifragilisticexpialidocious, meaning fantastic or excellent, is not the longest word in the English language. The 45-letter pneumonoultramicroscopicsilicovolcanokonios, a special form of silicosis caused by ultra-microscopic particles of siliceous volcanic dust, is.|"The Simpsons" spoofed the movie with an episode featuring a housekeeper named Sherry Bobbins. Unfortunately, she wasn't as successful as Mary Poppins in reforming the family -- or getting away at the end!