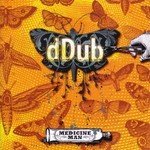 'Medicine Man' is the second album from one of Aotearoa's best-loved live rock / roots acts dDub. Their live show is phenomenal, their vibe uplifting and their sound infectious and easily accessible Winter? dDub are the best warming medicine, man. Get yourself a dose. "Performing as part of the annual Winter Festival, dDubs irresistibly upbeat rhythms captivated the audience. During their two hour-long set, vocalist/guitarist Derek Browne and his charismatic instrumentalists gave an uplifting concert that had all the precise musicianship of their recorded works and twice the emotion. Truly dDub is a band best enjoyed live, having proven one of the country's most accomplished acts time and time again at festivals such as Rhythm and Vines and Womad." - Elle Hunt (July 21 2008) The songs on the album are a culmination of two years writing, touring and extensive road testing. 'Medicine Man' was recorded in-between a busy 12-month schedule of 56 NZ and Australian tour dates and numerous summer festival appearances such as the 13,000 strong crowd at the Rhythm and Vines festival 08. The production approach for ''Medicine Man'' was to capture the live performance "magic" dDub is renowned for, and combine it with the subtleties and precision of the recording process. The band was heavily involved with producing, and utilised additional musicians to create a full and expanded sound. The legendary Don Bartley (Silverchair, Missy Higgins & Evermore) mastered 'Medicine Man' in Sydney, and it was mixed & engineered by Singapore based Stu Newman (Stellar & Greg Johnson). Newman was also a major influence in the sound of dDub's debut album "Awake at Dawn", which garnered 4 and 5 star reviews in NZ, Australia and the USA, and sold over 5000 copies locally. Tracks: Tracks: 1. Hesitate No 2. Medicine Man 3. See You Happy 4. Love Comes Around 5. Quicksand 6. Good Life 7. Paint Your Picture 8. Camel Song 9. Since I Made a Stand 10. Making Our Way Home 11. Seeds Been Sown