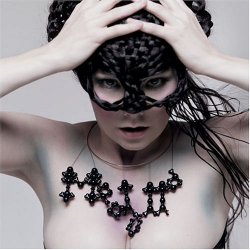 Bjork is one of the most recognized stars in the world. She has sold millions of copies of her groundbreaking albums, she is an icon of cutting edge style, & she has received worldwide acclaim as an actress. Medulla, Bjork's first new studio album in three years, finds her delving deeper than ever before into her haunting & exhilarating sound & vision. Innovative as always, Bjork has this time built the songs on Medulla entirely from vocal tracks, with no insturments appearnig on the album, creating a soundscape unlike anything you've ever heard before. Special guests include Rahzel from The Roots, Mike Patton of Faith No More & Mr. Bungle, an Inuit throat singer, an Icelandic choir, the world's greatest human beatboxes & more.

Do you want ot get the Medulla?