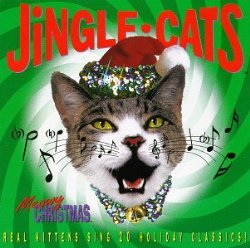 JINGLE CATS 'MEOWY CHRISTMAS CD AND CASSETTE: The world's first album of songs sung by real cats. A phenomenon! This is the album that started it all. Seen on television ABC, NBC, CBS, CNN and in newspapers, such as the Washington Post, Los Angeles Times and magazines such as CATS Magazine and People Magazine. The Jingle Cats album brought cat fanciers a roaringly funny album which speaks to humans and cats! Warning: listeners have reported losing control of their cars while listening to this album. The #1 requested Christmas album for radio stations nationwide, the #1 Christmas novelty album and Tower Records #1 selling Christmas CD in 1993, and a ranking in Billboard's Top 10 Holiday Album List for 1994.