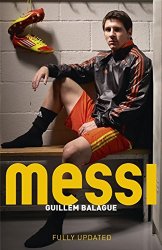 A rare glimpse into the life and career of Lionel Messi, one of the greatest soccer players of all time   On May 1, 2005, 17-year-old Lionel Messi scored his first goal for FC Barcelona, becoming, at the time, the youngest player ever to score in a league match for the Catalan club. Since then, his story has been one of meteoric—and seemingly limitless—success. Now, this compelling and perceptive biography by respected soccer journalist Guillem Balague gets to the heart of the mystery and genius that is Messi. From that first, league-winning season to the present, this chronicle details Messi’s historic feats, analyzing the reasons behind his barely comprehensible success. It examines the integral role he played during the 2008–2009 season, during which Barcelona won the league, the domestic cup, and the Champion’s League, as well as the drive and determination that saw him score an astonishing 91 goals in 2012, becoming—at the age of 25—Barcelona's all-time top scorer, and win four consecutive FIFA World Player of the Year awards. This account also examines Messi’s international career, during which, after a slow start, he has become Argentina’s second top scorer of all time. This is the story of one of the finest players to ever grace the sport of soccer, the diminutive Argentine who has been named by Diego Maradona himself as his successor and who always plays with a smile on his face at one of the biggest clubs in the world.

Do you want ot get the Messi?

Made in India: Recipes from an Indian Family Kitchen
K is for Knifeball: An Alphabet of Terrible Advice
Empire of the Summer Moon: Quanah Parker and the Rise and Fall of the Comanches, the Most Powerfu...
Blue Ocean Strategy, Expanded Edition: How to Create Uncontested Market Space and Make the Compet...
Secret Lives of the First Ladies
Holy Bible NLT, Personal Size Large Print edition, TuTone