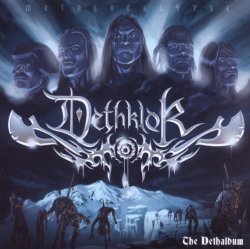 Dethklok is both a virtual death metal band featured in the animated program Metalocalpse,created by Brendon Small and Tommy Blacha, and the virtual band created to perform the band'smusic in live shows. The band is sometimes cited as an example of "comedy rock" on par with bands such as GWAR andSpinal Tap. Metalocalypse centers on the exploits of the biggest, most metal-est band in the world, Dethklok.As the band goes about their daily affairs, the evil (well, more evil) Tribunal tries in vain to stopDethklok from expanding their empire. Each episode features a new song from the band - and now the best of those tracks have beenexpanded, re-recorded and put together with all new songs to make the Dethklok album fans havebeen clamoring for.