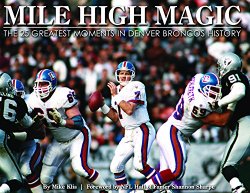 Throughout the years the Denver Broncos football team has provided fans with many memorable moments Peyton Manning s 7 TD passes in the 2013 season opener; the brilliant running of NFL MVP Terrell Davis as he broke 2,000 yards in 98; Champ Bailey s 100-yard interception return against Tom Brady in 06; the Tim Tebow to Demaryius Thomas TD pass to knock off the Steelers in OT in the 12 playoffs; and of course the late game heroics by Hall of Famer John Elway during The Drive in 87. Which moment is the most memorable? Let the great debate begin. In a book that has been long overdue for Broncos fans, author Mike Klis takes an inside look at the players, coaches and teams who make up Mile High Magic - The 25 Greatest Moments in Denver Broncos History. Klis, who covered the Broncos from 2005-2014 as the team s beat writer for The Denver Post and is now the Broncos Insider for 9News KUSA-TV in Denver, painstakingly researched each of the greatest moments and has ranked them in order of their importance and impact on the Broncos franchise. Read firsthand accounts from the players and coaches who helped make Sports Authority Field at Mile High Stadium one of the most difficult places for opponents to play. Featuring an impressive collection of photos throughout, Mile High Magic - The 25 Greatest Moments in Denver Broncos History promises to be a cherished keepsake for Broncos fans everywhere.