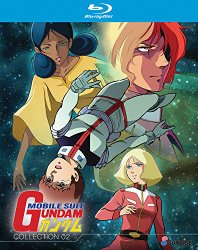 Available in high-definition on Blu-ray in North America for the first time with an all-new transfer from 35mm prints this collection is the epic conclusion to the series that launched one of the biggest anime franchises in history! The White Base is the target of constant attacks by Zeon, and Amuro and the others have officially become soldiers of the Earth Federation Forces. They return to space to fight in the final campaign, and here Amuro meets the mysterious and beautiful Lalah Sune. As the war builds to its conclusion, the final battle pits Federation against Zeon, brother against sister, and Newtype against Newtype. The Federation is weakened! Zeon is in turmoil! Will the Zeon fortress of A Baoa Qu stand or fall? It all ends here! Contains Episodes 22-42; Special Features: 30th Anniversary Staff Interview; Audio: English, Japanese. Subtitles: English; also includes original English dub by The Ocean Group (Starship Operators, Escaflowne: The Movie).