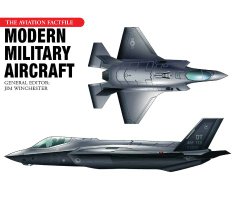 The information-packed pages of Modern Military Aircraft cover a broad range of aircraft, from high-tech superfighters such as the Lockheed Martin F-16, Lockheed F-117 Nighthawk, and McDonnell Douglas F/ A-18 Hornet, to the aircraft they were originally designed to counter: Russian types such as the MiG-29 "Fulcrum," Su-27 "Flanker," and Tupolev Tu-22M "Backfire." The book also includes current U.K. and European fighter aircraft such as the Panavia Tornado, SEPECAT Jaguar, and Eurofighter Typhoon, as well as less well-known aircraft from around the world. Each aircraft is covered in detail, with feature boxes outlining its development, technical specifications, performance data, and variants. Unique graphics allow you to compare specific features like firepower, troop-carrying capacity, and bombload to those of other aircraft of the same type. With a wealth of essential information on every page, Modern Military Aircraft is a must have for aircraft lovers of all ages.