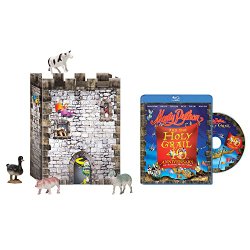 Once in a lifetime there comes a motion picture that changes the whole history of motion pictures. A picture so stunning in its effect, so vast in its impact that it profoundly affects the lives of those who see it. MONTY PYTHON & THE HOLY GRAIL might well be that motion picture.Special Features Include: -Catapult packaging and rubber farm animals -Letters from co-directors Terry Jones and Terry Gilliam -New Q&A with the Pythons recorded at the 2015 Tribeca Film Festival, hosted by John Oliver -Commentaries by Terry Gilliam, Terry Jones, John Cleese, Eric Idle, and Michael Palin -Outtakes and extended scenes with introduction by Terry Jones -Lost animations with introduction by Terry Gilliam -How to Use Your Coconuts (An Educational Film)