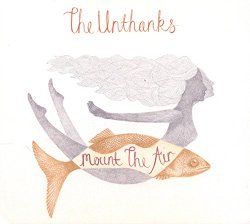 Nominated for the Mercury Music Prize and the only British folk representation in The Guardian's and Uncut's best albums of last decade, The Unthanks is a family affair for Tyneside sisters Rachel and Becky Unthank, with Rachel married to pianist, producer, arranger and composer, Adrian McNally. Even though McNally has scored symphony scale arrangements for The Unthanks, all three are musically untrained, and put their collective musical vocabulary down to the music they grew up listening to, rather than playing, for which both McNally and the Unthank sisters have parents to thank for. Using the traditional and folk music of the North East of England as a starting point, the influence of Steve Reich, Miles Davis, Sufjan Stevens, Robert Wyatt, Antony & The Johnsons, King Crimson and Tom Waits can be heard in the band's 7 albums to date. Mount The Air is the first studio album by The Unthanks since Last was released four years ago. The album has been two years in the making and is the first to be made in their own makeshift studio in Northumberland, set up in an old granary building.It is the first Unthanks record to feature writing from all 5 core members, including debut contributions from both Rachel and Becky Unthank, as well as continued and more extensive writing from pianist and producer Adrian McNally, including the opening 10 minute title track. Musically more ambitious than ever, the Mercury nominated Geordies are still a combination of grounded tradition and filmic orchestration, but with Mount The Air, they take on flavors from traditions as diverse as Spain, India, Blue Note and, err, Trip Hop. Mount The Air is the work of an act who still believe whole heartedly in the value of the album as an art form. On very limited resources and makeshift facilities, they have shown extraordinary commitment and devotion to that art-form, to create their finest work yet.

Do you want ot get the Mount the Air?

The Promise: The Darkness On The Edge Of Town Story (3 CD/3 DVD)
Crazy Love
Chants Of India
Send One Your Love
Middle of Everywhere
Greatest Hits I, II & III – The Platinum Collection