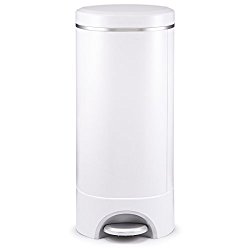 This is the new gold standard in diaper pails! STEP is the only pail that combines best-in-class odor control with a modern, sleek aesthetic that looks great in any nursery AND an easy-to-use foot pedal. Even better? For every single diaper pail sold, Munchkin will plant a tree! We're on a mission to reduce gassy emissions both inside AND outside the nursery. The STEP diaper pail works with both refill rings and snap, seal & toss refill bags, the choice is yours! To lock-in the stink, the pail relies on the odor-busting duo of lavender-scented Arm & Hammer baking soda and patented self-sealing technology, sealing in odors as the lid closes. Lastly, each STEP comes with a Munchkin lavender-scented PUCK, which continuously absorbs odors while the pail is not in-use and keeps your nursery smelling sweet (like babies should!). Additional refills sold separately. This is the perfect pail to have in your home, and also works as a great registry item! Take a deep breath, because the Munchkin STEP Diaper Pail has arrived.

Do you want ot get the Munchkin Step Diaper Pail Powered by Arm & Hammer?