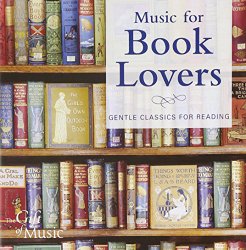 Music for Book Lovers Gentle classics for reading Gentle music makes a perfect accompaniment to reading. This selection has been chosen with the reader in mind. Many of the tracks began life with a literary theme or programme, taken from old legends, from Shakespeare s tales or from famous books. These works are interspersed with other characterful pieces which reflect a quiet mood or a scene from nature. Music is the exaltation of poetry. Both of them may excel apart, but surely they are most excellent when they are joyn d, because nothing is then wanting to either of their proportions; for thus they appear like wit and beauty in the same person. Henry Purcell Mendelssohn and Berlioz were both inspired by literature, particularly the works of Shakespeare. Both were part of a new awakening in Europe to the powers of the Bard, a trend fuelled both by new translations and by the increasing interest in and reverence for the past which characterised many forms of artistic endeavour in the early decades of the nineteenth century. For Grieg and Tchaikovsky, as part of a younger generation which saw much political upheaval and an increasing pace of technological change, that cultural awareness of the past was charged with the extra elements of nationalism and patriotism. They turned to legends and historic figures from their own countries and wove their stories and themes into their music. It has always been possible to see music, particularly opera, as an expression of a political or sociological system, but for the composers of the mid-nineteenth century it became a more potent means of personal and political, even subversive, expression than ever before. Franz Liszt became embroiled in revolutionary fervour and in the rapidly changing times and he was one of the first musicians to travel on concert tours by train, a far cry from the risky and uncomfortable carriage and four of the young Mozart and his father! Liszt focused his attention on the wealthy aristocrats of all Europe, but Franz Schubert stayed firmly at home in his native city of Vienna, where he entertained his friends and a select group of patrons on a much smaller scale. His more public efforts, such as Rosamunde were ever doomed to financial failure, despite the breathtaking beauty of his melodic style. Edward Macdowell may also have been at his happiest with his musical miniatures, composed for similar society gatherings in Boston and New York at the turn of the twentieth century. This programme also includes music from a much under-represented genre, British light music. Martin, Hanmer and Coates were involved in the less serious side of music-making, and their careers ran in parallel to those of composers such as Elgar and Vaughan Williams and conductors like Sir Henry Wood and Sir Thomas Beecham. Their work was considered populist and ephemeral (and may well have been composed in this spirit), but in recent times these striking compositions have been rediscovered and a new respect has grown for their technical skill, musical charm and considerable sophistication.