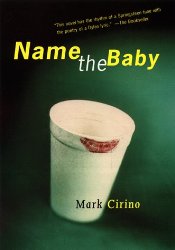 After the shocking suicide of his girlfriend, a twenty-one-year-old struggles to figure out the mysteries of life and love. This extraordinarily intense novel follows a young man during a three-day odyssey that begins with a night of self-abuse in New York City. Fueled by whiskey and his own internal demons, he goes to a blues bar where a bouncer assaults and ejects him, and then on to a club where he dances with a beautiful girl he names Goldheart. Burdened with guilt, sadness, and rage, he returns to his family in New Jersey where he is forced to face uncomfortable truths about his relationships with them and his past. During this journey, he reflects with refreshing originality on his own life, the ways of the world, failed relationships, music, Shakespeare, dogs, cemeteries, and psychedelic drugs.Name the Baby is a deeply moving novel in which the reader gets swept along by the intoxicating rhythm of its language and becomes a confidant of the narrator's most personal thoughts, observations, and confessions. Full of haunting surprises, unexpected warmth, and brutal honesty, it is an outstanding debut from a writer whose remarkably fresh and original voice leaves a lasting impression.