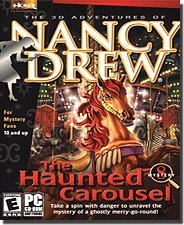 The merry-go-round at Captains Cove seems to have a mind of its own. Late at night, when the park is deserted, it takes off on a bizarre riderless journey. Will you be able to unravel the mysterious happenings surrounding this beautiful antique carousel? You, as Nancy Drew, are invited to the Jersey shore to investigate a series of mishaps at the Captains Cove Amusement Park. First, the lead horse was stolen from the carousel. Then the roller coaster suddenly lost power, resulting in a serious accident. Now the merry-go-round is mysteriously starting up in the middle of the night.The amusement park is closed while the insurance company looks into the roller coaster accident. Nancy begins her own investigation by interviewing park employees, including office manager Joy Trent; chief engineer Ingrid Corey; security officer Harlan Bishop, and Elliot Chen, the parks art director.As her search unfolds, Nancy learns about the lonely craftsman who carved the carousel horses, and about the sad history of the parks former owner, Daryl Trent. Before he died he hid puzzles and riddles throughout the park to reunite his daughter Joy with her past.Heres who she meets:Harlan Bishop -Security guard Oversees Captains Coves security system. Recently hired to work at Captains Cove. Helpful, efficient, good at his job Evasive at times Doesnt have a theory about the carousel haunting or the sabotageIngrid Corey -Chief Engineer - Maintains and manages all the rides at Captains Cove Knows her stuff Is interested in holistic medicine Tends to be forgetful Believes the park is cursed Elliott Chen -Art Direction Responsible for all the visual components at Captains Cove Familiar and skilled with all art media Interested in contemporary culture Procrastinator Has no theory on w