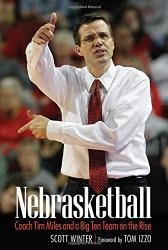 When fall rolls into winter, most sports fans in Nebraska long for spring football. But Coach Tim Miles has given hibernating fans a reason to cheer through winter for the first time in twenty years. Since taking over the men’s basketball program in 2012, Miles has gone from being relatively unknown outside college coaching circles to a big name on the national stage as an up-and-coming, funny, and fan-friendly college coach.Miles scores big with Nebraska’s fans with his social media acumen—he tweets during halftime—and his fan interaction—he applied (and failed) to become the leader of the student section at Pinnacle Bank Arena. But on the court and in practice, Miles is all about winning. His combination of toughness, togetherness, and humor has rejuvenated Nebraska basketball.Nebrasketball provides a full-access account of Tim Miles’s path to Nebraska and his team’s inaugural season in the $186 million Pinnacle Bank Arena. With full access to Miles and the team, Scott Winter provides basketball fans with an intimate look at a rising star in college basketball, detailing what it’s like to coach an NCAA men’s program today with all of its triumphs and struggles, along with Miles’s larger story as a transformational coach who has made Nebraska basketball, and other college programs, relevant. The book also shows the small-town legacy and tenacity that created Miles, including his mother’s prodding, his benching as a college player, and his significant history of losing, which he claims was his most important mentor.