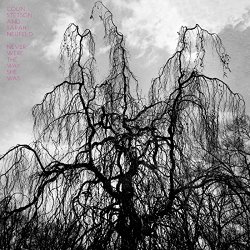 Two of Constellation's acclaimed solo instrumental artists join forces on this tremendous new album of original compositions for horn and violin. Colin Stetson has developed a unique and highly-acclaimed voice as a performer/composer, chiefly on bass and tenor saxophones, rallying an array of technical strengths and innovations to make some of the most captivatingly organic, darkly soulful and otherworldly solo instrumental work of recent years with his New History Warfare trilogy. The solo violin work of Sarah Neufeld has emerged more recently, and especially through 2011-2014, in the period between her primary band Arcade Fire's last two albums; she's forged a distinctive and evocative solo violin practice combining rock, folk, ambient and modernist sensibilities, culminating with her debut solo album Hero Brother in 2013. 'Never were the way she was' charts an expansive sonic trajectory with a multiplicity of structures and voicings that belies the fundamental economy of two acoustic instruments combining in real time. The resulting musical chronicle powerfully establishes its own spatial and temporal horizon; Stetson and Neufeld offer up an impressively immersive integration of composition, performance, timbre and texture. 'Never were the way she was' is a sum quite definitively and thrillingly greater than its parts.