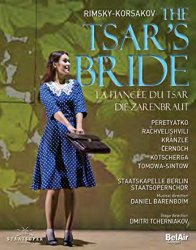 Based on an historical case, Nikolai Rimsky-Korsakovs The Tsars Bride takes place in the suburbs of Moscow during the reign of Tsar Ivan IV, the Terrible, during the latter half of the 16th c. Widowed, he is looking for a new wife, his third. He chooses the young Marfa. She loves another man but bends to the Tsars will and renounces her love for the other. From this plot, Russian director Dmitri Tcherniakov retains only the frame. A live competition is organized for a virtual monarch, much like the reality shows of today. Here, the characters become the various players of the audiovisual industry bringing an acerbic critic to contemporary television. Daniel Barenboim conducts the Staatskapelle Berlin. With Olga Peretyatko, Anita Rachvelishvili and Johannes and Martin Kränzle. Recorded at Staatsoper, Im Schiller Theater Berlin, in October 2013.