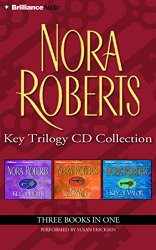 Key of LightThe Malory Price Life Plan does not include a quixotic quest―but the strangers on Warrior's Peak claim that she must find a key that will release three souls held captive by an evil god. Little does she know that the quest will bring her two new friends, the love of her life, and danger beyond anyone's imagination.Key of KnowledgeTo Dana Steele, books and the knowledge they hold are the key to contentment. But now that search for knowledge must include the second key. She won't be alone, for she's formed fast friendships with two very different women. She can't allow herself to be distracted by the return of the man who broke her heart so long ago, for a danger beyond anyone's imagination is determined to keep her from completing her quest.Key of ValorLight and Knowledge have succeeded in their quest, and two of the keys have been found. The final, and last, test goes to Zoe McCourt―Valor. Zoe has the courage to raise her young son alone, and to face all the adversity life has thrown at them. But will she have the courage to face a foe determined to do anything to stop the third key from being found―even destroying everything―and everyone―she loves?