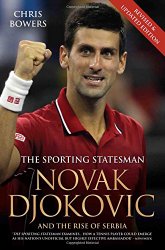 A revised and updated edition of the biography of one of the greatest living tennis players, and his relationship with his homeland of Serbia Novak Djokovic is not just one of the world’s great tennis players—he is a de facto ambassador for his country, Serbia. It is no easy task, given the country’s role in the Yugoslav wars of the 1990s; indeed, some people still associate the name "Serbia" with "atrocities." In this study of both Djokovic and Serbia, Chris Bowers paints two profiles. He traces the story of the boy from modest surroundings, showing how he met the woman who not only taught him tennis but how to deal with life as a high-profile figure, charts his battle with illness and the relationship with his volatile father, and how he is representing his country internationally. Yet interwoven into his narrative of the brilliant tennis player is the story of Serbia, pulling no punches about the country’s role in the 1990s wars but offering a sensitive interpretation of the hopes and aspirations of a nation and a people with a troubled past, but bright hopes for the future. Bowers, biographer of Swiss tennis star Roger Federer and the British Deputy Prime Minister Nick Clegg, weaves together the sporting and geopolitical strands to present a sensitive portrait of a man and his people, and of how determination married to sensitivity can create a sporting statesman. Now revised and updated to include the 2015 Australian Open, this is the definitive study of a very remarkable player.

Do you want ot get the Novak Djokovic and the Rise of Serbia: The Sporting Statesman?