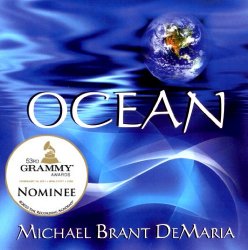 Ocean was recently nominated for a GRAMMY for Best New Age Album of The Year. Ocean is the second album in the Healing Sound Project by multi-Grammy nominated recording artist Michael Brant DeMaria. Ocean held the #1 spot on the New Age/World/Ambient Chart for 3 months and then went on to win two Zone Music Awards: BEST AMBIENT ALBUM OF 2009 and BEST RELAXATION/MEDITATION ALBUM OF 2009 which are awarded based upon voting of radio, internet and cable broadcasters throughout the world. This album is based on 25 years of research into the world of sound healing. Ocean takes the listener deep into the ambient sounds of the Ocean. He has been the featured musician for renowned poets Robert Bly and David Whyte and played and studied with Grammy winner David Darling in addition to many other Grammy and Grammy nominated recording artists. Michael writes in the liner notes: The Ocean brought all life to this planet. The Ocean is the great mother of the watersheds of earth - without which we could not live. The oceans of the world touch every continent, every people, every culture on our planet. They accept us all regardless of color, custom, language or belief. Much like the ever flowing rivers of the world, we take on different names and forms until we are ready to go home - to the place we began - our One Source - the Ocean of Being where life can always begin again with hope, love and life. These are my tone prayers and sound poems offered up in honor and respect of the wisdom of the ocean waters. This music served to heal me and revive me from the devestating hurricane seasons of 2004 and 2005 where we lost our home - so I dedicate them to all who are in need of peace, tranquility and healing in times of struggle, transition and transformation. Breathe, release, listen and let go. A portion of proceeds from the sale of Ocean go to support Wildlife Recovery from the Gulf Oil Spill.

Do you want ot get the Ocean?