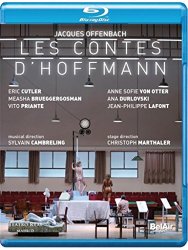 Although posthumous, Les Contes d'Hoffmann (The Tales of Hoffmann) is considered as the masterpiece of Jacques Offenbach's work. Inspired by E.T.A Hoffmann's, this opéra fantastique mixes love, pain and whim. Its an ôde to art and poetry. The intrigue settles around three stories about a broken love. Told by Hoffmann, narrator and hero, these tales paint a portrait of three feminine figures: Olympia the automaton, Antonia the dying opera singer and Giulietta the courtesan. This triptych allows the development of very different universes, and color. Its also a declension of the image of the woman and of the evil. Christoph Marthaler signs this creation for the Teatro Real. This is Gerard Mortier's last commission for this stage. From Letzte Tage to King size, the Swiss director has proven his ease in many different registers. An essential capacity needed for a work as rich and subtle as The Tales of Hoffmann. Music is conducted by Sylvain Cambreling and the cast includes Eric Cutler, Anne Sofie von Otter, Measha Brueggergosman and Jean-Philippe Lafont.