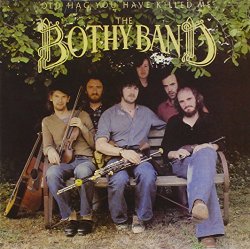 First released in 1976, this album was immediately hailed by critics and listeners alike as a signal that a new direction in Irish music was being forged.Over 30 years later, it is every bit the awesome achievement it was played up to be. Its influence is felt even now everywhere Irish music is heard or played. Old Hag You Have Killed Me contains many Bothy Band Classics and one of the greatest musical lineups ever: Micheal O'Dhomhnaill (vocals, guitar), Triona ni Dhomhnaill (vocals, keyboards), Paddy Keenan (Pipes, Whistle), Matt Molloy (flute, whistle), Donal Lunny, (bodhran, bouzouki, and guitar) and Kevin Burke (fiddle) in his first appearance with the Bothy Band.

Do you want ot get the Old Hag You Have Killed Me?