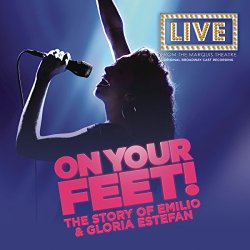 Gloria Estefan has sold over 100 million records and sold out stadiums around the world. Emilio and Gloria Estefan together have won 26 Grammy Awards® but their music is only half the story. From the heart of Havana to the streets of Miami came a cultural phenomenon unlike anything the music industry had ever seen. On Your Feet! is the new Broadway musical that follows the Estefan s journey to superstardom set to their chart-topping smash hits including Rhythm is Gonna Get You, Conga, 1-2-3, Get On Your Feet, and a new original song written for the musical by Gloria and her daughter Emily Estefan, If I Never Get to Tell You. On Your Feet! stars Ana Villafañe making her Broadway debut as Gloria and Josh Segarra as Emilio. The musical is directed by two-time Tony Award® winner Jerry Mitchell (Kinky Boots, Hairspray) and choreographed by Olivier Award® winner Sergio Trujillo (Jersey Boys, Memphis) with an original book by Academy Award® winner Alexander Dinelaris (Birdman, The Bodyguard Musical). Completing the production team are three-time Tony®-nominated scenic designer David Rockwell, Tony®-nominated costume designer Emilio Sosa, Tony Award®-winning lighting designer Kenneth Posner, Tony Award®-winning sound designer Steve Kennedy with music direction by Lon Hoyt and orchestrations by Gloria and Emilio Estefan. On Your Feet! opened on Broadway at the Marquis Theater on November 5, 2015 onyourfeetmusical.commasterworksbroadway.com