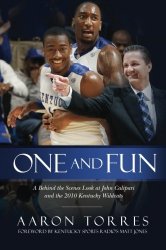 As things stand, the Kentucky Wildcats are the premiere program in college basketball. Under the watch of head coach John Calipari, the team annually competes for National Championships, and routinely finds itself playing in the Final Four, on the final weekend of the college basketball season. But it wasn't that long ago that Final Four dreams and National Championship expectations were the furthest thing from the mind of Kentucky fans. The truth is, after missing the tournament entirely in 2009, many fans wondered if Kentucky would ever be Kentucky again. Then, just when the program hit its lowest point, the school made a move that would change the landscape of college basketball forever: Kentucky hired John Calipari. He brought in a slew of highly-ranked recruits. And college basketball would never be the same again. "One and Fun: A Behind the Scenes Look at John Calipari and the 2010 Kentucky Wildcats" is the story of Calipari's first season and Lexington, and the Wildcats' rise from "overlooked" to the No. 1 ranked team in the country. Through exclusive interviews with stars John Wall, Patrick Patterson, Eric Bledsoe and others (not to mention Calipari himself), author Aaron Torres captures the essence of an unforgettable season, which marked the rebirth of Kentucky basketball as we know it. From the star player's arrival at Kentucky, through a million dollar fundraiser and even a call from the President of the United States, Torres takes you behind the curtain, and captures it all, documenting the wild ride of one of the most dynamic teams in the history of college hoops. The 2010 Wildcats might not have won it all, but they did change college basketball forever. Re-live it all, in "One and Fun: A Behind the Scenes Look at John Calipari and the 2010 Kentucky Wildcats"