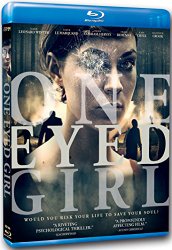 Travis, a young psychiatrist, is haunted by the suicide of one of his patients. On the brink of a nervous breakdown, Travis meets Grace, a representative of a secret church that promises salvation to even the most troubled of its members. Intrigued by both the alluring Grace and the possibility of redemption, Travis joins the church and meets its leader, the charismatic Father Jay. At first skeptical, Travis eventually is indoctrinated into the church s sometimes radical practices and becomes a believer in the utopian world Father Jay promises to provide. But when a series of tragedies befalls Father Jay and his flock, Travis and his fellow members trust is shaken to its core. Now Travis must decide if his loyalty truly lies with Father Jay, the ever-elusive Grace, or himself. Featuring standout performances from each member of its talented cast, ONE EYED GIRL is a dark thriller filled with tension and dread that will haunt you long after the final frame.