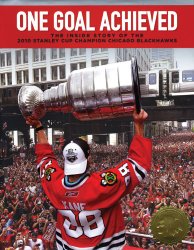 On June 9, 2010 the Chicago Blackhawks made history, capping an extraordinary season with the storied franchise's fourth Stanley Cup championship. Led by dynamic stars including captain Jonathan Toews, Duncan Keith, Patrick Kane and Marian Hossa, the resurgent Blackhawks made the 2009-10 season one for the ages, capturing the imagination, passion and excitement of the entire Windy City. Following Kane's overtime heroics to capture the title, more than 2 million fans lined the streets of Chicago to welcome home hockey's most coveted prize, celebrating the Blackhawks' realization of their "One Goal."In One Goal Achieved: The Inside Story of the 2010 Stanley Cup Champions, the Blackhawks relive every stunning moment of this unforgettable year, from the NHL Premiere in Helsinki, Finland, to the 2010 Winter Olympics in Vancouver, all the way through the dramatic game 6 overtime win in Philadelphia and beyond! One Goal Achieved takes you to the ice level for an entire legendary campaign, featuring never-before-seen photographs and stories. With full color spreads showcasing the players front office personnel who returned championship hockey to Chicago, photos from crucial games, off-ice team-bonding activities and much more, One Goal Achieved is a must-have for any die-hard Blackhawks fan.

Do you want ot get the One Goal Achieved: The Inside Story of the 2010 Stanley Cup Champions?