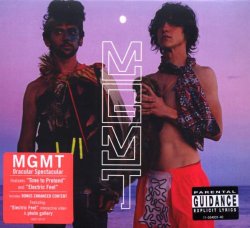 Forty years after the Summer of Love (and 30 years after the Summer of Hate), MGMT is celebrating the grand re-opening of the third eye of the world with Oracular Spectacular, an enigmatic and prophetic collection of hallucinatory sounds and hook-riddled Pop tones for the new millennium. MGMT is: Andrew Vanwyngarden and Ben Goldwasser, two psychic pilgrims whose paths first intersected in the green pastures of Wesleyan University in Middletown, Connecticut, circa 2002. The pair was drawn to the music of other duos and found themselves incorporating the implications of the hallucinatory power-twee of the Incredible String Band, the roaring subway minimalist Electronica of Suicide, the silky Pop-Soul of Hall & Oates, the pulsing narcotic trance of Spacemen 3, the avant-garde Industrial romanticism of Royal Trux and much more into the constantly evolving sounds of MGMT. Columbia. 2008.

Do you want ot get the Oracular Spectacular?

Intercontinentals
The Golden Age of the Andrews Sisters [ORIGINAL RECORDINGS REMASTERED]
Signify
The Song Within
Love
All Star: The Smash Hits