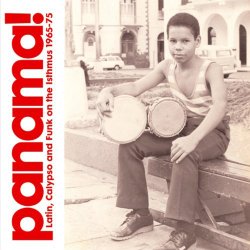 Heavy tropical sounds from the Isthmus! Panama played host to many musicians from across the Caribbean to South America, laying down some of the best Latin, funk and calypso ever recorded -- long forgotten and unrepresented until now! Soundway continues its mission to expose the best in funk, Latin and Afro music from Africa, the Caribbean and South America by introducing the likes of the The Exciters, Victor Boa and Lord Cobra once again, giving them the exposure and recognition they deserve. Panama occupies a unique place both geographically and culturally within Central America and the Caribbean. The clubs and bars of Panama City and Colon would vibrate to sounds imported from Colombia, Jamaica, Trinidad, New Orleans, Miami and the Caribbean, all given the special Panamanian dressing. We have dug deep to present a broad range of styles that run parallel to the development of soul and funk music in the US and the nascent salsa sound emerging from Miami, Cali and Baranquilla. The album covers heavy Latin descargas, raw calypsos, deep funk sounds and Caribbean soul -- all unavailable since they were first issued in tiny numbers thirty years ago! All tracks have been carefully licensed and re-mastered and sound as vibrant and relevant today as the day they were released. This album represents an important departure for Soundway as their first full-length collection of music from outside the African continent. It is a continuation of their aims to expose overlooked styles and sounds from different parts of the world and bring together the disparate strands that make up the rhythms of African, Latin and Caribbean music. Packed with in-depth liner notes, original cover scans and contemporary photos.