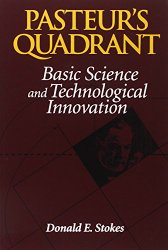 Over fifty years ago, Vannevar Bush released his enormously influential report, Science, the Endless Frontier , which asserted a dichotomy between basic and applied science. This view was at the core of the compact between government and science that led to the golden age of scientific research after World War II - a compact that is currently under severe stress. In this book, Donald Stokes challenges Bush's view and maintains that we can only rebuild the relationship between government and the scientific community when we understand what is wrong with that view. Stokes begins with an analysis of the goals of understanding and use in scientific research. He recasts the widely accepted view of the tension between understanding and use, citing as a model case the fundamental yet use-inspired studies by which Louis Pasteur laid the foundations of microbiology a century ago. Pasteur worked in the era of the second industrial revolution, when the relationship between basic science and technological change assumed its modern form. Over subsequent decades, technology has been increasingly science-based. But science has been increasingly technology-based - with the choice of problems and the conduct of research often inspired by societal needs. An example is the work of the quantum-effects physicists who are probing the phenomena revealed by the miniaturization of semiconductors from the time of the transistor's discovery after World War II. On this revised, interactive view of science and technology, Stokes builds a convincing case that by recognizing the importance of use-inspired basic research we can frame a new compact between science and government. His conclusions have majorimplications for both the scientific and policy communities and will be of great interest to those in the broader public who are troubled by the current role of basic science in American democracy.