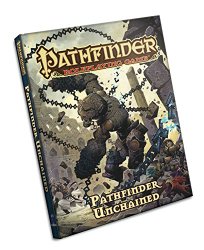 Break your chains! The Pathfinder RPG contains numerous rules considered sacred by players and GMs alike. Since the system itself was based upon RPG "technology" already more than 10 years old at the time of its creation, "backwards compatibility" often meant sticking with the familiar, even if tradition was filled with cobwebs and decades-old assumptions. Pathfinder Unchained dares to take a fresh look at the system itself, altering some of the fundamentals of the game and giving fresh optional takes on classic rules. Inside this hardcover collection of alternate rules and options you'll find completely redesigned versions of the barbarian, monk, rogue, and summoner classes. Delve into a new system for resolving player actions designed to speed play and dispel confusion. Many of the new systems (such as the revised classes) work seamlessly with the existing Pathfinder rules. Even the most staunchly traditionalist player will appreciate the book's math-lite system for on-the-fly monster creation and the new system for generating dynamic magic items that go far beyond a simple +1 to add lore and interest to the campaign. Players will love the book's new resource pool for martial characters, allowing for exciting new tactical options, as well as the robust new system that allows spellcasters to modify their spells with powerful spell components.

Edenbrooke
Saving the Season: A Cook’s Guide to Home Canning, Pickling, and Preserving
Modelling and Sculpting the Human Figure (Dover Art Instruction)
Hunting Eichmann: How a Band of Survivors and a Young Spy Agency Chased Down the World’s Mo...
End of Watch: A Novel (The Bill Hodges Trilogy)
Not Dead Yet: The Memoir