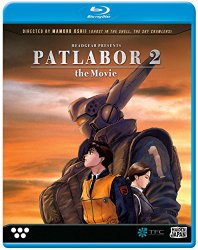 A rogue military jet bombs a Tokyo bridge. The city is in panic. But is it a real terrorist attack, the first stage of a coup, or the opening gambit of an even more Machiavellian plot? As the military attempts to take control and Martial Law is declared, the task of untwisting the complex web of secrets, lies, and betrayals falls to the convoluted mind of Captain Kiichi Goto. But when the Defense Forces have been turned against each other and government itself may be suspect, who can he depend on as his ground troops in a bid to pull the country back from the brink of oblivion? The men and women of the SV2 and their mobile force of Ingram patrol robots, of course. The grand climax of the Patlabor franchise is unleashed in the critically acclaimed second feature from director Mamoru Oshii (Ghost In The Shell, Avalon) - PAT PATLABOR 2 - THE MOVIE!