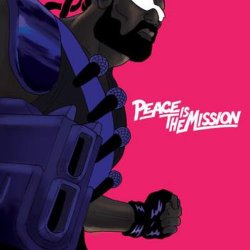 Limited vinyl LP pressing. 2015 release, the third album from Major Lazer, the collaborative project created and produced by Diplo (AKA Wesley Pentz). The album was preceded by the international hit single "Lean On" featuring DJ Snake and MØ. The single reached number one in Australia, Belgium, Denmark, Finland and the Netherlands and peaked within the Top Ten in an additional 14 countries including the United Kingdom, the United States, and Germany. Major Lazers 2010 mixtape Lazerproof and EP Lazers Never Die paved the way for a collaboration with Beyonce on her massive hit "Run the World (Girls)." In 2013 Major Lazer's second full length album Free The Universe was globally released.

Do you want ot get the Peace Is the Mission?